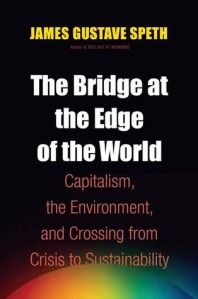 We are now faced with the fact that tomorrow is today.  We are confronted with the fierce urgency of now.  In this unfolding conundrum of life and history there is such a thing as being too late.  Procrastination is still the thief of time.  Life often leaves us standing bare, naked and dejected with a lost opportunity.  The tide in the affairs of men does not remain at the flood; it ebbs.  We may cry out desperately for time to pause in her passage, but time is deaf to every plea and rushes on.  Over the bleached bones and jumbled residue of numerous civilizations are written the pathetic words: “Too Late.” – Martin Luther King

It’s with this quote from Dr. King that James Speth ends the introduction to his 2008 book on Capitalism and the Environment.  It’s an uncomfortable read that is not afraid to back down from the fact that we are standing on the precipice of profound change.  Change we can either embrace and direct or change that will be thrust upon us as the logical conclusion of our actions.

Speth form’s much of his argument around statements like this.  In fact he quotes other authors so often that at times I was actually unsure if I was reading any of Speth’s original thoughts or a collection of quotes from others.  But the fact that he draws from so many other sources only serves to provide weight to his argument.  If all of these other writers have being saying these things for so long why haven’t we heeded their warnings before now?

One particularly damning statement comes from a collection of some of the brightest scientific minds of our time:

Speth goes on to place the blame for our over consumption squarely on the shoulders of Global corporations and their propensity to “externalize” costs by drawing on the work of Paul Raskin and others like him.

All the bad things that happen to people and the environment as a result of corporations’ relentless and legally compelled pursuit of self-interest are neatly categorized by economists as externalities – literally, other people’s problems.  – Paul Raskin; The Great Transition

Finally at the end of the book Speth begins to show some originality when he begins to discuss Globalization and its effects on sovereignty.  Globalization is the corporately driven phenomenon of our time.  But when done right, influenced not just by economic share holders but also responsive to the needs of local communities, what emerges is not traditional globalization but what Speth calls “Glocalization”.

When responsible corporations rule the world the result is a more global village than anything that can be accomplished through our current political structures.  This is part of the choice that must be made, this is The Bridge at The Edge of the World.

Globalization of many descriptions is eroding state sovereignty.  The nation-state, is has been said, is too little for the big things and too big for the little things.  “Glocalization” is emerging, with action shifting to local and global levels.  In many places, especially in Europe, one can see psychological disinvestment in the nation-state and the strengthening of both local and transnational citizenship.  – James Gustave Speth; The Bridge at the Edge of the World