My Reverse Journey Through the Wesleyan Quadrilateral

John Wesley was an 18th century Anglican Theologian. He, along with his brother Charles and their friend George Whitefield are credited with the founding of the evangelical movement, later to become known as Methodism upon which much of modern Evangelical Christianity is based. Wesley and his friends established their main theological statements as an attempt to further explain and clarify the protestant reformation.

The main battle cry of the 15th and 16th century protestant reformers was “Sola Scriptura” – Scripture Alone! The most famous reformers, Martin Luther, John Calvin etc, took up their battle against the Catholic Church saying that the traditions and political history of the church had corrupted the bible. The church they claimed was teaching things that simply couldn’t be supported by a careful reading of the text. Up until the time of the reformation the average Catholic, even a large number of priests, were functionally illiterate so no one could dispute what they were being taught. All that changed in 1492 when a German blacksmith named Johannes Gutenberg invented the printing press. The word of God was now accessible to the masses and suddenly it was possible for people to read the scriptures for themselves. The Sola Scriptura movement was born.

But 200 years later John Wesley noticed something. He noticed that as much as the original reformers were genuine in their desires to get “back to the bible” Sola Scriptura doesn’t really exist. According to Wesley, the way in which we interpret scripture is influenced by three things. It’s influenced by our experience, our reason and even though the main goal of the reformers was to combat unscriptural traditions there’s really no way we can get away from tradition entirely. And so the Wesleyan Quadrilateral was born. We start and end with the Bible, interpreted through our own Experience, Reason and Traditions. B-E-R-T.

I grew up in a Mennonite Church in Southern Ontario. Although not as well known as his contemporaries Luther and Calvin, Menno Simons was one of the original reformers. Menno built his church on a mantra of Sola Scriptura but took it one step further by focusing almost all of his teaching and interpretation on the Sermon on the Mount, [Matthew 5-7]. For Menno and the church he led the entire bible must be interpreted through this very narrow lens consisting of just 3 chapters. Absolutely everything Jesus said and did can be explained and clarified here. It’s a beautiful way of looking at the world and for the most part it works but in my experience what Menno taught has been distilled down and calcified within the church that bears his name as nothing more than tradition.

About 10 years ago when I was still attending a mainline Mennonite Church the traditions of the denomination and my local congregation began to make me feel like a bit player in Fiddler on The Roof. You know the scene; there’s Tevye full of pride and a reverence for his Jewish heritage standing in the middle of the town square shouting “Tradition!” Then he stops, looks right in the camera and asks, “And why do we have these traditions? I don’t know…”

It looks like he’s about to ponder that revelation but before he can challenge his own assumptions for too long he jumps right back in shouting “Tradition!” all the louder.

The rest of the story follows a similar trajectory to a Greek tragedy. Tevye’s world slowly crumbles while he clings to the traditions of the past.

So here I was a young thirty something, starting my career, establishing my place in the world and any time I would push back on some of the traditions of my own upbringing I would receive a similar response. “We do it this way, because we do it this way, and that’s the way we do it…”

It was frustrating and I nearly left the faith over it.

But then the Holy Spirit stepped in and did something radical. My boss at the time, an unapologetic atheist, called and asked me if I would be willing to move from my home in London, ON to work at our head office in Toronto. I didn’t realize it the time but I can honestly credit that atheist with saving my faith. Through the process I needed to find a new church community. I am so thankful that I was able to find a church and a teacher who understood the need to place tradition in its proper context. 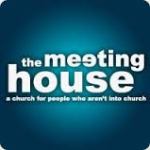 My first year at The Meeting House (a multi-site church community that meets in movie theatres across Ontario) was an incredible journey. Prompted by the teaching I received on Sundays I went back to the bible in a way I never had before. Not only did I re-read the Sermon on The Mount, I re-experienced it, I re-reasoned it and in so doing I gained and new and deeper understanding of the traditions of my past. I took a reverse journey through the Wesleyan Quadrilateral and my faith that had begun to wither and die on the vine of tradition came alive in the roots of scripture.

I tell people that it’s because of the four years I spent at The Meeting House in Oakville that I still call myself a Christ-follower today. The company I was working for went through some major changes and family needs have caused quite a bit of turmoil but my faith remains strong. It’s as if the Holy Spirit knew what was coming and He had to make sure I was grounded in Him in order to weather the storm I was about to go through. I don’t know what would have become of me otherwise.

I moved to Ottawa in 2011. Due to changes in the industry I was forced to start my life over again but I am happy to say that even with everything that is different the one constant has always been the church I attend. I am grateful for The Meeting House and the multi-sight vision more that words can express.

When I started this post I thought I was going to explain an important theological position to my readers. But God has a funny way of making my writing very personal. I thought about scrapping this post and starting over but then realized God wanted me to write this way for a reason. I shed a few tears as I wrote this, it’s truly how I feel and there’s no point in censoring what I am led to write.

I am grateful for John Wesley, Menno Simons and my church community for teaching me the value of the Bible, Experience, Reason and yes Tradition. I didn’t set out to write an advertisement for The Meeting House but if you’re in Ontario and you you’re looking for a new and exciting way to do church, check it out.

What’s your faith journey been like? I’d love to hear your story. Write to: themeekonomicsproject@gmail.com