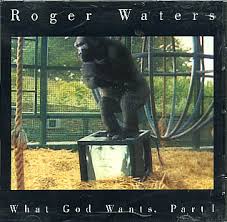 I bought my first CD player in the fall of 1993. The first CD I bought was Roger Waters, Amused to Death. It’s still without a doubt my number one favourite album of all time.

I’m an audiophile, not only was the production quality of Amused to Death light-years ahead of anything I had ever heard before or since, but this is Waters, former front man of Pink Floyd at his poetic, prophetic best.   In the era of 24 hour cable news, political scandal, economic turmoil, war and terrorism the socio-political commentary made has stood up remarkably well for over 20 years. I don’t want this blog entry to be a review of my favourite album however. Go get a copy of if you’re interested, you won’t regret it, but I want to talk about the sentiment that Waters brings out in a track called “What God Wants, Part III”.

It’s not personal it’s only business, is a cliché spoken by just about everyone in business at least once in their career. But they usually say that after they have hurt someone or been hurt personally by a business decision they or someone else made. Mario Puzo wrote The Godfather at one point the hero of the story, Don Corleone says; “It’s all personal, every bit of business. Every piece of shit every man has to eat every day of his life is personal. They call it business. OK. But it’s personal as hell.” When I first started in business I heard an A&R (Artists and Repertoire) executive at a major record company say that the music business was a simple business about selling plastics discs containing audio recordings that are pleasing to the ear, but it gets complicated because there are people behind it all, people with dreams, obligations and egos. International sales trainer Brian Tracy says that “All Business is People Business.”

I hurt someone yesterday. I hurt them because, as much as the decision I made was a business decision, it was a decision the effected them personally. The decision was made to protect one person from paying too much for something they could get for less money elsewhere but it affected the bottom line of the other person trying to sell the higher priced product.

“It’s only business”, I sighed. But I know it’s a lot more than that, maybe it means the difference between hiring someone or not. At the end of the day it’s always personal to someone. I only hope the pain is temporary.

Have you ever made a business decision that hurt someone personally?