I’m currently working on the first draft of a book on Leadership, tentatively scheduled for release sometime in late 2016, or early 2017. The working title of the book is “LeaderSheep; Leading from a Posture of Submission in Business, Ministry and Life”. The following is an excerpt from the chapter on Teamwork that I wrote this past week, I hope you like it…. 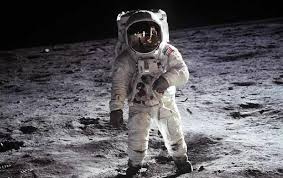 With those words President John F. Kennedy launched the Apollo Moon Mission during a speech at Rice University in Huston Texas. That was September 12, 1962, seven years later on July 20, 1969 Neil Armstrong was the first human to walk on the surface of our nearest celestial neighbor.

Contrary to the popular images we receive in the media, astronauts are not swashbuckling, thrill seeking, space cowboys. Despite the fact that we prefer to portray them in this way, being an astronauts actually requires a huge amount of humility, attention to detail and team work. When Neil Armstrong’s foot touched the surface of the moon it was the culmination of not just seven years of hard work but decades of theorizing, simulation, exploration and testing, that had been carried out by literally thousands of human beings on the ground and in short missions that just orbited the moon, long before Armstrong was even considered for the job.

How easily we forget that the mission Armstrong was a part of was actually the 11th mission of the Apollo space craft. NASA had launched 10 other Apollo rockets into space for the sole purpose of learning as much as they possibly could about the moon and space travel before they attempted to land there.

Today, NASA maintains a staff of about 40 astronauts, give or take, many of whom have never been to space and may never get the chance to go, along with thousands of other support personnel. Due to its international character, and the relative size of the International Space Station (ISS), the average length of stay in space (about four months), and the stringent medical requirements placed on astronauts, only an average of 3 people a year are ever selected for missions to space.   Each mission is carefully planned and choreographed for years before departure. Therefore the math suggests that over a thirty year career an astronaut might get just one chance to go up. When you consider previous experience in space as an asset though, chances are that fewer than half of the astronauts currently employed by NASA will ever get the chance to fly beyond our atmosphere.

The real job of an astronaut is not to spend time in space but to plan and simulate processes and procedures that are carried out by their colleagues on the ISS. This is usually done in an underwater buoyancy lab that simulates weightlessness or by using computerized models and simulators. The results of all of this testing is then relayed on to their colleagues in space. 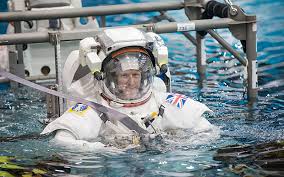 Partly due to all of this planning and simulating to date NASA has never lost an astronaut in space. A few dozen astronauts have been killed during launch and re-entry to our atmosphere and the Russians lost three men due to an oxygen leak in early 70s but considering the number of times we’ve sent people into space and inherent danger involved that is a remarkably small number. It is a testament to the teamwork of astronauts on the ground.

Chris Hadfield is the only Canadian ever to command the ISS. Over a 20 year career with the Canadian Space Agency and NASA he has been to space three times, twice on the shuttle and once in a Russian Soyuz capsule. He has spent more days in space than just about anyone currently employed by any space agency in the world. If anyone has the right to be proud of his accomplishments, it’s Hadfield. But in his book “An Astronaut’s Guide to Life on Earth” Hadfield makes it clear that being an astronaut is not about personal accomplishments or glory, an astronaut, according to Hadfield is the ultimate team player. A proud, arrogant or even just a too overly confident astronaut is a dead astronaut.

Hadfield also understands the value of doing your job as part of a team before seeking a position of leadership. They way he puts it;

If you enter a new environment intent on exploding out of the gate, you risk wreaking havoc instead.

My own personal story bears this out. In hind sight, my boss and I should have known I was in for a bumpy ride when I arrived on the scene at my new job back in 2001.

Prior to moving to the Head Office and taking on the sales manager role in 2003, I had led a restructuring project within the organization. The company I worked for at the time was originally set up with a franchise model. As with most franchise models the Head Office set policy, managed advertising and ran the retail website. Independently owned regional offices handled local distribution and local relationships with suppliers. Right from the start there was some tension between the head office and these independently owned and operated franchises. When a few of the franchises started making their own policies that ran counter to the vision that head office had for a strong central organization things started to fall apart. One by one local franchises either closed voluntarily or had their contracts revoked for various violations of central policy.

From 1999 to 2002 I was one of these local franchise owners. For the most part I followed the rules but as other franchises across the country closed the decision was made by head office not to reopen them. Instead they decided to restructure the company and eliminate the franchise model altogether. As the last remaining franchisee I was offered a very attractive buyout and a job running the newly formed sales department at head office. But before I could do that, and before my buyout was completed I was asked to help clean up the mess left by former franchise owners all across the country. For about 2 years I split my time 50/50 between my responsibilities at head office and my own local franchise. 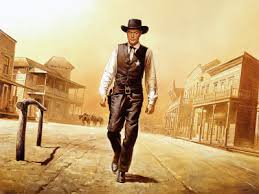 When I arrived on the scene for my first day at head office I walked into the warehouse, where a long time employee was diligently working through thousands of boxes of product that had just been returned from our franchise in Edmonton and announced, with all the piss and vinegar I could muster; “There’s a new Sheriff in Town!” The employee set down the box he was carrying and looking at me with thinly veiled cynicism asked what I thought he should be doing. Honestly, I had no idea. In less than 30 seconds I had managed to alienate the only other person in the room and the one guy who could actually teach me what needed to be done. I had exploded out of the gate, as Chris Hadfield says, and burned my credibility in one shining moment of arrogance. I hadn’t even bothered to ask my new co-worker’s name before I blew up any chance that he would be an ally in the process in which we were about to embark.

Thankfully Andy (I did eventually get around to asking his name) turned out to be a diligent colleague who took pride in the quality of his work. He eventually forgave me for bungling our first encounter and we went on to develop a very good working relationship although I never felt like he fully trusted me.

Here’s the point. Leaders must remember that they are members of their teams first. It’s an often quoted cliché that there is no “I” in “Team” and that’s true. But it goes deeper than that. The military structure of small units working toward a goal comes to mind here. The Sergeant of a platoon is just a much a member of the team as he is the leader. He is often the first one through the door, and the last one off the battle field. In the movie “We Were Soldier’s” Mel Gibson declares to his platoon that he will be the first one on the field of battle and the last to leave and the film makers drive that point home over and over again with artfully place images of Mel Gibson’s boots. At both the start and the end of the battle there are slow motion frames of him stepping off and back on the helicopter that brought him to the battle field.

Effective leaders, especially LeaderSheep lead their teams from within. They are the first ones in, the last ones out and hardest workers throughout the day.