Quick – What’s the most positive thing you can say to someone who is asking you do something you just don’t want to do? 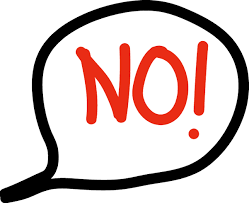 It is my considered opinion, after years of dealing with people close to me who have a warped sense of what it means to be good, helpful and gracious, that the best way to stay positive in a negative situation is to simply say no to some people.

It’s counter-intuitive, I get that but we’ve been taught from a very early age that nice polite people always say yes and that’s just not the case.

Can you help me move on Saturday?

Will you drive me to the airport? Why not?

Never mind the fact that I have my own jobs that need doing, I was planning on fixing my garden on Saturday and I really just need some time to myself so I can recharge the batteries and finish that novel I started reading six months ago. But my needs aren’t as important as yours, I want to be a nice person so I’ll suck it up and say yes.

Being agreeable is seen as a virtue while saying no and standing up for or my rights and emotions somehow gets me seen as selfish.  That’s just wrong! Often times saying yes can really lead to enabling and saying no can be the most loving and gracious thing you can do to help someone take control of their own life and grow as a human. Saying no forces people to look for other options and can therefore be the most positive thing you can say to in a lot of situations.

Here are 3 situations just off the top of my head when saying no is actually a positive response. 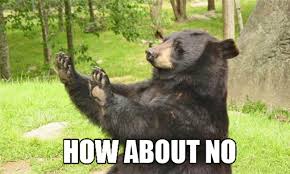 1 – When saying yes contributes to dependency and enabling

When your alcoholic friend asks you drive him to the liquor store, say no. That’s a no brainer. But less obvious, when your disorganized sister-in-law asks you to baby sit the kids, in five minutes, while she goes to a dentist appointment that she booked 6 months ago, you should still say no. How else is she going to learn to plan ahead?

Best-selling author and syndicated radio host Dave Ramsey says that enablers are the nicest people in the world, except for one thing, they’ve defined help wrong. Saying yes to people who need to change their behavior or get professional help is not helping. No is the right answer when yes contributes to a deeper problem.

Here’s a scenario; it’s a long weekend, I’ve worked hard these last few months and I’m looking forward to working in my garden and maybe reading a book on the patio. Six months ago I asked my brother-in-law to help me trim the hedges but he never got back to me. Just as I’m about to open a beer and enjoy some “me” time he shows up unannounced with the hedge trimmers and expects me to drop everything. No, I’m not doing that today, I need some quiet time. Call ahead.

I’m sure you can think of a number of other similar situations. You have plans, someone else asks for help or worse assumes you will change them because their needs, in their eyes, are more immediate but to say yes would set you back on your own agenda. We’ve been taught that saying no in these situations is selfish but isn’t it just as selfish to expect people to change plans for you? Yes it is, so explain to me again how saying no in the first place is selfish as well?

3 – When what you really mean is no

It all comes down to how we handle our emotional response. For such a short word, No, carries a lot of emotional baggage with it. Saying yes when you really want to say no does something to our psyche, it hurts us in ways we don’t immediately recognize or understand. It makes us bitter and contributes to our own long term anger and depression.

Social researcher and author Susan Cain, has pointed out the following;

One noteworthy study suggests that people who suppress negative emotions tend to leak those emotions later in unexpected ways… Later, however, the people who hid their emotions suffered side effects. Their memory was impaired, and the negative emotions they’d suppressed seemed to color their outlook. – Susan Cain; Quiet, The Power of Introverts in a World That Can’t Stop Talking

So the next time you are asked to do something, take a breath before you respond and think it through. Will saying yes ultimate hurt the person who’s asking, or yourself? Is no maybe the better response in the long run?

People might not like you in the moment, and they may never see it as a positive but sometimes it’s not about that. Sometimes you have to say no in order to remain a positive influence in people lives, especially your own.