Development economists working in Sub-Saharan Africa and other deeply impoverished regions throughout Asia and Latin America often debate the severity and/or very existence of what they call a “Poverty Trap”. In its simplest terms a poverty trap forms when the cost of capital is too high and return on investment too low for people to earn enough to raise their income above the poverty line. 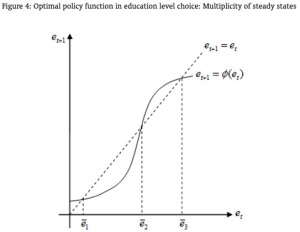 In the graph here the net return on investment is represented by the S shaped curve while the poverty line is represented by the diagonal dotted line. Over time it is possible to exert significant effort or borrow money to invest and increase your income sufficiently to reach and exceed the poverty line. But the costs incurred either in debt or personal health to pull yourself out of poverty are so high that in relatively short order the overhead required to maintain the new lifestyle is so high that it pulls the individual back under the line. At that point without some form of relief, they will remain trapped indefinitely.

In the world of development economics it is believed that this is the reason why no matter how much money the World Bank, IMF and well meaning NGOs throw at “basket case” economies they will never be able to pull people out of extreme poverty without significant debt relief and some fundamental change on the political, societal and cultural level. Some believe that the poverty trap is a myth that can be busted through sheer entrepreneurial will while others believe that it is real and can only be beaten through debt forgiveness and investment grants.

Personally I’m not smart enough to have a well formed opinion on the matter but I have been thinking a lot lately about the existence of an S curve in the world of personal finance.

I have made no secret of the fact that back in 2005 I declared personal bankruptcy. I’m not proud of that but I strongly believe that the experience served to profoundly shape my life. In the months leading up to my bankruptcy I was living on the S curve. I borrowed money just to survive, eventually climbed above the line only to find that the overhead cost of servicing my new debt pulled back down. My income did not increase enough as a result of my borrowing to hold me above the line and the weight of the debt kept me trapped.

Two things had to happen in order for me to break the poverty trap.

First I had to stop borrowing more money. I performed plastic surgery, cut up my credit cards, severed my relationship with the payday loan centre, sold one of my cars and cut back on just about everything. I cut the TV cable, trimmed the phone plan and started shopping at the discount grocery store instead of the one with the fancy deli counter and mood lighting.

Second I had to get some relief from the debt. I called all of my creditors and tried to negotiate a better interest rate, some were accommodating but most weren’t. It helped but it wasn’t really enough to make any lasting change so I finally had to take the drastic step of filing a consumer proposal in bankruptcy. That served to make my debt manageable but it killed my credit rating. A lot of people were shocked that I went that route saying that the damage to my credit would hurt me more than I knew, but honestly, since I had first resolved to stop borrowing more money I barely noticed, you don’t need a credit rating if you refuse to borrow.

The point is this: The Poverty Trap is real! Whether or not it is possible to break it through sheer will and entrepreneurial spirit is open for debate. In my case I needed outside help in the form of debt relief but for the most part I did it on my own through hard work and resolve. Today I live comfortably above the line but I am acutely aware of the dangers of increased overhead, either through foolish spending or unsustainable debt.

Getting trapped is very easy. Getting out is extremely difficult and can require outside help. If you are in debt and need help getting off the S curve I’d be happy to hear from you, write to: themeekonomicsproject@gmail.com