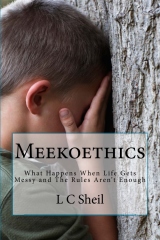 After almost a year of writing and editing my second full length book hit the virtual shelves last week! Get yours today here or directly from me here.

I think this is my best book yet!  But of course I am biased.

I originally started writing it as an extended tangent to my first book “Meekonomics”. I thought I was writing a commentary on the current state of the North American Church. But as often happens when I write, what I set out to do and what the final product ultimately becomes are two completely different things. This time was no different.  Instead of writing about the church I ended up on a journey of discovery around the intersection of faith, culture and the will of God. At times it got messy, as the sub-title of the book suggests but at other times the way in which I see the world, and indeed the way in which I understand God’s role in it, achieved a startling clarity.

Here is an excerpt from the book on that type of understanding:

I am the Alpha and the Omega, the First and the Last, the Beginning and the End. [Revelation 22:13]

Christianity came to prominence in the west under the guidance of a Hellenistic world view. Greek philosophers have always been obsessed with essence. How far can we boil a concept down before we get at the core of the teaching? For centuries, that line of thinking has driven our understanding of God.

Don’t get me wrong. By trying to find the essence of Christianity and of God in this way, we have to a large degree discovered some profoundly beautiful truths about him.

God is Love, [1 John 4:8] was the main point on which I based my last book and remains a major theme of all my writing. We have been taught, through centuries of Hellenic thinking, that this is the essence of God. But in getting at His essence, we have missed the beauty that also lives on the outer edges of our understanding.

The word “understand” was not originally a word that meant we had all the answers. “To understand” is better described as to stand under something, to stand in submission to a truth that you don’t fully grasp. I stand under and submit to the truth that God is Love but I wrestle daily with how that resonates throughout society and touches my life. I stand under it but I don’t understand it, so to speak.

Even though our society has now largely taken on the Hellenic worldview of essence and perfection, the Bible was not written primarily by Greeks who lived out of a worldview of essence. It was written by Hebrews who live out of a completely different worldview. The Hebrew worldview is one that seeks to define the edges of the target instead of the centre of the bull’s-eye. Understood from a Hebraic point of view we read passages like Revelation 22 in a completely different way.

What God is saying to John at the end of Revelation is not “this is my essence.“ No, what he is saying is “This is what I encompass”. Any discussion of ethics therefore needs to be a discussion of the circumference of the target. God is defined by the edges, but life happens in between.

And as I have discovered, life is messy.

For more information on “life in between”, the Meekonomics Project or any of my writing and work in the area of Christian-ethics and financial planning write to: themeekonomicsproject@gmail.com and save the date for our official book launch and Financial Seminar on Oct 7, 2015.