We left off last time talking about the 5 Whys process for turning failure into success.  As we get close to the end of the year I’ve started using the 5 Whys to analyze my past successes and failures and make plans for 2018.

I’ve come to an uncomfortable conclusion.

When I look at some of my biggest failures from this past year.  The lost deals, the solid prospects that the just didn’t convert, the opportunities that withered on the vine and the clients that just outright left, the answer to the 5th why is a variation of the same thing.

That sounds trite, but it’s accurate.

More to the point, I was Emotionally Unintelligent.

In every instance of failure that I analyzed I came to the same conclusion.  I one way or another I was out of sync with my client or prospect and failed to recognize what truly mattered to them.  I made the sales process all about product and forgot about the client’s underlying emotional needs.  And what’s worse, as the prospect pulled away I made their failure to move forward all about me and my failure to communicate the benefits of the product.  As deals started to spin away from me I doubled down on a strategy that wasn’t working and further alienated the prospect.

your ability to recognize and understand emotions in yourself and others, and your ability to use this awareness to manage your behavior and relationships. 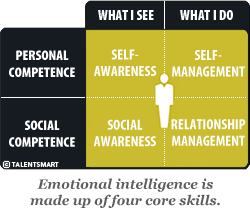 The chart to the right is a typical four quadrant diagram that is popular with psychologists in analyzing behavior.  In this diagram we see the four core skills of Self-Awareness, Self-Management, Social Awareness and Relationship Management aligned with perception; what I see and reaction; what I do.  These skills are further aligned with personal and social competency.

In my failures I tend to be severely lacking in the perception side of the diagram, I don’t see how people are reacting to what I am doing and therefore am unable to adjust my behavior in a way that makes people comfortable moving forward in relationship with me.  If I were to place myself as a dot on the diagram I would be in the top right corner, very strong in Self-Management, I work hard and am disciplined.  I’m very task oriented, my mantra could be that the best kind of To-Do List is a Done List.  But I am extremely lacking in Social Awareness.   In my desire to get things done I tend to push people aside.

My greatest failure of 2017 was with a fast-growing company that I had the opportunity to work with on setting up a Group Benefits program.  I am met with the prospect and immediately hit it off with one of the co-owners.  We were having a great time, talking about business, telling jokes and swapping stories about our past business successes and failures.

Everything was going great. 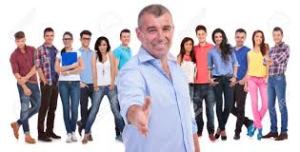 Then my prospect took me into his partner’s office to say hello.  His partner was in another meeting, but we interrupted because we thought what we had was more important.  To be fair – I didn’t interrupt the meeting, my prospect did and that’s not what I believe caused the problem.

I was introduced around the room as “The Group Benefits Guy”, and while there were other people in the room I immediately forgot their names and laser focused my attention on the business partner.  Looking back at it now I realize that in that moment I went from the fun-loving Group Benefits Guy who was going to help this company move it’s HR process to the next level to that jerky salesman who only cares about people who are in a position of power.  It took a few more weeks but I truly believe that the opportunity was lost in that moment.

A few weeks later the prospect told me that they were pretty much ready to go with the Group Benefits plan, all we had to do was confirm with the partner.  I never heard from the company again.  My follow up messages went unanswered and within a few more months I found out that they had signed up with a competitor.

In doing my 5 Why’s analysis of that failure I concluded that at the critical moment, when I needed to show that I was in tune with the culture of the organization and took their people’s best interests seriously, I failed.  I was emotionally dumb.  To this day I still don’t remember the names of the other people in the room.  For a time, I even forgot the partner’s name and just referred to him in an email as “your partner”.

Why am telling you all this?

Studies have shown that people of average intelligence out-perform those with higher intelligence nearly 70% of the time.  The difference isn’t in classic measures of intelligence.  It’s in how we interact with each other.  Top performers have a higher emotional intelligence and can align their Personal Competencies with their Social Competencies and their perception with their actions.  The closer to the center of that four quadrant diagram you can hang out, the more successful you will be.

I’m not big on New Year’s Resolutions.  I prefer to make course corrections as I become aware of a need and this one is huge.  If I were to make a New Year’s Resolution for 2018 it would be this – To become more Emotionally Intelligent, get better at truly seeing people and working to aligning my actions with their needs.