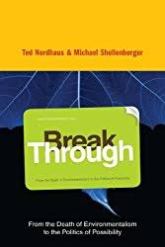 In 2007, at the end of the second term of President George W. Bush, America and the world stood at a crossroads.  The sovereign debt crisis and subsequent economic collapse of 2008 and the election of Barak Obama had not yet happened, but the seeds of their impact had already been planted and the cracks in the status quo were already starting to show.  The Kyoto protocol, the U.N.’s sweeping resolution to combat global warming was all but dead, America was mired in a seemingly endless war in Iraq and Osama bin Laden was still on the loose believed to be hiding somewhere in the mountains of Pakistan.

It was against this backdrop that two social scientists the directors of the economic research firm American Environics, Ted Nordhaus & Michael Shellenberger published “Break Through:  From the Death of Environmentalism to the Politics of Possibility”.

The politics of limits took hold in the 1970s and has dominated political debate for over 40 years now.  As the unprecedented economic expansion that marked the post-war era began to wane and the national embarrassment of Vietnam, Watergate, and the middle eastern oil embargo began to sink in politicians stopped talking about expansion and possibilities and started to couch their rhetoric in terms of protectionism and limits. President Jimmy Carter referred to America in the late 1970s as a nation suffering through a collective “malaise”.  On the campaign trail in 1980, then candidate Ronald Reagan seized on Carter’s comments and called for “Morning in America”.  The slogan promoted a sense of hope and possibility underpinned with a conservative “America First”, isolationist, us versus them agenda.

Nearly 40 years later little has changed.  Indeed, in the intervening decade since the publication of “Break Through”, American politics has become even more polarized.  Eight years under President Barak Obama, while strongly progressive in its approach to social issues like LGTBQ rights and health care reform, left many Americans feeling disenfranchised as they perceived a loss of economic opportunity and a deminishing “Christian” identity as a nation.  Economic concerns mounted while globalization continued to send more and more jobs to places like China and Mexico.  And anxiety over immigration and an increasingly post-Christian social landscape continued to take hold. 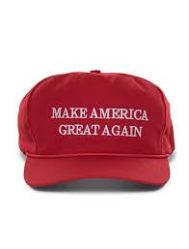 The time was right for another “Morning in America”, this time in the form of a bright red baseball cap emblazoned with the slogan “Make America Great Again”.  What exactly that meant and what mythical time it sought to return was unclear and left to the imagination of perspective voters.

Nordhaus and Shellenberger where writing at a time before both Obama and Trump but in reading their work today their analysis of the state of American politics and economics seems eerily prophetic.  With the exception of a few bumps on the road, most notably at the end of the 1970s, and between 2008 and 2011, economic expansion since the end of World War Two has continued pretty much unabated.  But as the authors assert, to keep people voting for the same old solutions you need to convince them that things are getting worse, not better.  When you are the party out of power you need to promote insecurity not contentment to get people to think about change.  According to Nordhaus and Shellenberger:

The rise of insecure affluence has caused social values to evolve in two directions simultaneously.  Rising insecurity has fueled the move away from fulfillment values and back toward lower-order, postmaterialist “survival” values, which tend to manifest as status competition, thrill-seeking, and hedonism, all of which have triggered a cultural backlash that conservatives more than liberals, Republicans more than Democrats, have harnessed.  At the same time, rising affluence has fueled a shift, over the past century and a half, away from traditional forms of religious, familial, and political authority and toward greater individuality.

But rising insecurity in the face of affluence is the construct of spin masters, it has little basis in reality.  If you have more money you should also have more security, but the political strategists have mastered the manipulation of fear based on the threat of loss.  Limiting beliefs that your affluence could be taken from you are what have kept people in survival mode and stunted progress even as affluence has continued to increase.

The authors go on and later remind the reader that:

Just as prosperity tends to bring out the best of human nature, poverty and collapse tend to bring out the worst.  Not only are authoritarian values strongest in situations where our basic material and security needs aren’t being met, they also become stronger in societies experiencing economic downturns…  This shift away from fulfillment and toward survival values appears to be occurring in the United States…  Survival values, including fatalism, ecological fatalism, sexism, everyday rage, and the acceptance of violence, are on the rise in the United States.

It’s that line about “authoritarian values” that caught my eye first.  At some point during the 1992 election cycle, the one that saw Bill Clinton gain the presidency I recall seeing a republican commentator refer to the two parties as the “Mommy Party” and the “Daddy Party”.  His point was that Americans tend to vote republican when they feel threatened and need a strong father figure to tell them what to do, they vote democrat after daddy has save them and they feel secure enough to go out and do their own thing.   The underlying point of his argument was that even when America votes democrat, it’s because the republicans are better at giving people the security they ultimately want.

What Nordhaus and Shellenberger propose is a move away from limiting beliefs and toward a more open and progressive society like the one that predominated in the years immediately following the Second World War.  Forget for a minute about the overtly racists, sexists and religiously conservative society of the era and consider more the fact that this was the era that gave rise to the reconstruction of Europe, the construction of the Inter-State Highway System, the expansion of world wide economic markets in places like Japan and the far east, the civil rights movement, and ended by putting a man on the moon.  These were great, progressive achievements that came about through expansionist politics and a belief in possibilities beyond limits.

It beings with an expressing of gratitude for how far we’ve come and an acknowledgment of how much we have yet to do.  As Nordhaus and Shellenberger put it toward the conclusion of their book:

Those of us who are fortunate enough to have met our basic material and postmaterial needs should feel neither guilt nor shame at our wealth, freedom, and privilege, but rather gratitude.  Whereas guilt drives us to deny our wealth, gratitude inspires us to share it.  It is gratitude, not guilt, that will motivate Americans to embrace the aspirations of others to become as wealthy, free, and fortunate as we are.

The politics of possibility begins by embracing human ingenuity and rejecting limiting beliefs.  Progress will come when we all recognized that nostalgia cannot be allowed to limit our longing for greatness.  “Make America Great Again” assumes that our best days are behind us and seeks to return to a mythical time when things were better than the are today.  It seeks to limit immigration because things were better before “those” people lived here.  It seeks to limit personal human rights for minorities, women and homosexuals because things were better before I had to compete for my job or think about what those two guys are doing in the privacy of their own home.  It seeks to limit imports of goods from other countries, block the development of green technology and prevent competition of any kind. 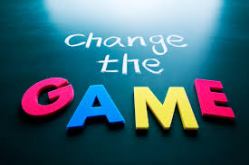 You don’t win by enforcing unfair “rules”, you win by getting better at the game or embracing a completely different set of circumstances.  And you win by changing the game completely.

That’s progress and the politics of possibility.