The Balti Theory of Relationships

I’m a coffee drinker.  This is a story involving tea but that shouldn’t matter.

I’m not a fan of a lot of fancy coffees.  Just straight up brewed coffee from a pot or Keurig machine is all I need.  If I am going to splurge on something exotic, I go for a strong espresso or café americano, nothing too foamy or overly sweet.  I always drink my coffee black, mostly because I am lactose intolerant but since I discovered that, I have found I prefer the fuller taste that milk or cream can tend to dull.

I used to do a lot of business networking in coffee shops.  Until recently there was no better place to have an informal, meet and greet with a new or perspective client.  Of course, COVID19 has changed all of that.  Now all my meetings, regardless of purpose have gone virtual.  That’s not necessarily a bad thing, it saves a lot of time, no more driving across town, paying for coffee, looking for a table etc.  Even though I do miss the atmosphere of a good coffee shop and I feel for the entrepreneurs that run them I can’t say I’ve really missed a beat by moving my meetings online.

Regardless of where our networking occurs, one thing has not changed.  It’s still all about personal relationships.

I learned what I call The Balti Three Cups of Tea Theory of Relationships from educational activist Greg Mortenson.  He learned it while building schools in the mountains of Pakistan. 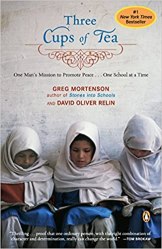 Mortenson’s story was first published in the 2006 book, “Three Cups of Tea”.  In a nutshell, back in 1993, while climbing K2 he got separated from his party, ended up injured and stranded in a remote, underserved region of Pakistan.  There he discovered a Balti village tribe where the children had to walk several miles, over treacherous mountain trails to the nearest school.  In winter, the trail would be impassible, leaving the children without access to basic education for several months at a time.

After spending weeks among the Balti people, recovering from his injuries, he promised to repay their hospitality and build them a school.  Over the next decade Mortenson would return to Northern Pakistan several times and oversee the construction of over 50 schools across the region.

Since the publication of Mortenson’s story, the details and results have been called into question.  It seems when one person sets out the change the world there are no shortage of others who want to tear him down, but that’s a different post.  The point of this post is how Mortenson learned to build relationships across a religious and cultural divide, not to mention a significant language barrier.

The Balti people do business over tea.  According to one of the village elders that Mortenson worked with, the first time you share tea with a Balti you are a stranger, the second time you are an honored guest, and the third time you are family.

I’ve been in business for nearly 30 years, the last 10 of which have been in my current capacity.  Before COVID I used to joke that I’ve met with clients and prospects in every coffee shop from here to Deep River, (about 200 kms away) and I have found the Balti theory to be remarkably accurate.  It takes an average of 3 meetings before enough trust has been built to get anything done.  I have also found that each meeting must be approached in its own unique way to maximize your effectiveness and move the relationship forward.  Poor execution at one meeting can seriously damage your chances of getting the to next one and ultimately to the sale.

Here are some of the things I have learned moving relationships forward.  While we can’t meet in coffee shops right now these tips and tricks for execution are still incredibly useful and tend to work just as well in a virtual environment.

“The first time you take tea with the Bakti you are a stranger.”

Likewise, the first time you meet with a prospective client.  It has been my experience that no real business ever gets done in the first meeting.  People don’t do business with strangers.  The purpose of the first meeting is for the prospective client to get to know you.  Start by asking a lot of open-ended questions about their business, their personal life, how they got started, and what their hopes and dreams and plans are.

By asking those questions and letting the prospect talk as much as they want you will gain a ton of information without being aggressive or sounding like a salesperson.  When they start to run out of steam ask a few follow up questions about what they have done to achieve their goals, who they have worked with in the past and most importantly, what their experience has been with individuals similar to you.

That last one is too often overlooked, and it is key in moving out of the stranger pool.  Everyone has a bias or preconceived notion about you and what you offer, even if they won’t admit it.  By asking point blank what their experience and impression has been with people like you, you immediately uncover what that bias is.  Once you know that you can tailor your offering to address their specific needs and concerns.

Now it’s your turn to talk.  Don’t forget, at this point you are still a stranger so don’t be aggressive or say anything that could make the prospect feel uncomfortable.  Repeat back some of the things they have said, affirm their goals and dreams, congratulate them for their accomplishments and acknowledge their concerns.  Then make it clear that you do business differently and that you have a unique approach that can make a significant impact on their goals.

After I have determined the prospect’s main goals and biases, I finish off with one last question that sets the stage for the next meeting.  “If I could show you a way to achieve x without y, would that be a conversation worth having?”  That answer is almost always yes, at that point it’s time to wrap it up and book the next meeting.

It’s important at this point not to pitch a product.  You are still a stranger, by piquing their interest you are on the verge of becoming a welcome guest the next time but you haven’t gained enough trust to ask for a sale.  That comes later.  Go away leaving them wanting more and looking forward to your next meeting.

ime you share tea with a Balti you are an esteemed guest.”

If you did your job in the first meeting, the prospect will want to hear from you again.  When I arrive at the appointed time and place of this second meeting, I sometimes visualize a grand welcome like how you would expect a visiting dignitary or celebrity to be greeted.  I rarely get the literal red-carpet-treatment but it helps to build up my confidence and put me in the right frame of mind, remember, the prospect wants you here, you are an esteemed guest.

In the previous meeting you not only listened to their goals and dreams, you affirmed them.  And then you heard their concerns and gave them hope.  You’ve gone from stranger to welcome guest.  You aren’t yet family, but you potentially hold the keys to a better tomorrow and for that you will be honored.  The stakes are exponentially higher in the second meeting, now you must deliver value.

At the end of the last meeting we left the prospect wanting more by leaving the open question; “If I could show you a way to x without y, would that be a conversation worth having?”   But you haven’t gathered enough details about their unique situation yet so this time I like to bring a full proposal that answers a similar question but is based on a completely different client’s set of details.  I use this as an example to show the kind of work I do for people with similar concerns as the prospect.

By using a different set of details, I accomplish three things in a non-threatening manner:

After walking the prospect through the solution that I used with another client I can then ask for the exact details of their situation.  If I’ve done my job to this point, the prospect will almost always give me everything I need to build a proposal for them.

Once I’ve gathered all the personal details I need, I set a time to come back a third time with their unique proposal.

“The third time you share tea with a Balti, you are family.”

If you’ve made it this far in the relationship you know a lot of personal details about the prospect, you’ve been invited in and are now family.  In fact, you probably have a more intimate knowledge of certain aspects of their life than some actual family members do.  The trust you have been given is sacred and the care with which you present your solutions must rival that of a doctor laying out a treatment plan or a priest counselling them through a major life event.

Forget about the red-carpet this time.  When I arrive at this meeting I like to visualize standing on holy ground and presenting the prospect with the tools to embark on a sacred journey.  Again, I am rarely treated like Gandalf or some other mystical guru, but the mental exercise helps set my mind on the monumental importance of what I am about to share.   I present the solution with a level of reverence and respect that shines through to the prospect and helps cement my position as the one who holds the key to unlocking their goals and dreams.

It might take a fourth meeting to fill out an application and collect a cheque but if I’ve done my job to this point, validated their goals and dreams, affirmed their concerns and presented appropriate solutions, the sale is all but assured.

I’ve presented this process as three neatly planned meetings.  The reality is that it there can often be several months of telephone, email, and other discussions between each of these meetings.  It takes time to build relationships but given enough time, Gandalf always wins.