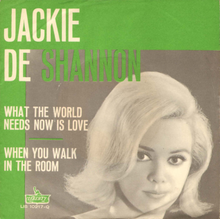 In the spring of 1965 singer Jackie De Shannon released the single “What the World Needs Now is Love.”  By mid-July the song, written and produced by Burt Bacharach and Hal David, had worked its way up the Billboard Hot 100 to peak at number seven in the US and number one in Canada.  Written during the Vietnam War it is a folk anthem originally intended to bring people together regardless of their political views.

The song popped into my head recently while I was flipping through some journal notes.   A few months back I wrote, “every community of love can love more”.  As I read those words, quite unbidding into my head popped the lyric:

It’s the only thing, that there’s just too little of.

We live in anxious times.  Back in February I heard that over a quarter of Canadians surveyed said they would be fearful of being around someone with a serious mental illness.  I get it, mental illness has a unique capacity to make us all feel helpless.  If you have ever spent time with someone suffering from anxiety or depression you know that it doesn’t take long before you are feeling completely inadequate to help.  At that point it’s just easier to walk away and leave the afflicted to the “professionals” but the fact is that people suffering from mental illness need community more than they need clinical intervention.

And that was also before COVID, before we all started dealing with enough severe stress and anxiety to be classified as mentally ill ourselves.

It’s true that perfect love drives out fear, but repeated exposure just desensitizes us.  So the best way to manage fear and anxiety is to suck the drama out of it and just admit that it is part of being human.  Draw together, do not run in fear from one another.  We are designed to bring healing and wholeness through one another.

In addition to love at times like this we could also use a bit more justice and a bit more hope.

Justice has been a big topic lately, ever since race relations successfully bumped COVID19 off the front pages of newspapers around the world.  But we don’t want just any justice, we want the kind that puts people and things into right relationships with one another and justice that doesn’t add burdens to the already over-burdened.

And we need hope, the kind that is tied up with honesty.  We need the kind of hope that says we believe things can get better while acknowledging that things aren’t right at the present moment.

So, I guess there is more than one thing that there is just too little of, Love, Justice and Hope to name a few.  But that wouldn’t make for a very good song.